Over the weekend of 1 - 2 February 2020, the Tug of War Association had the pleasure of hosting the 2020 British and Irish Indoor Tug of War Championships in the Avon Hall at the Three Counties Showground in Malvern, Worcester.

Unfortunately, this year’s event was not as well supported as it could have been, but the show went on and we saw some good indoor tug of war between all of the teams that took part in the open and closed competitions. 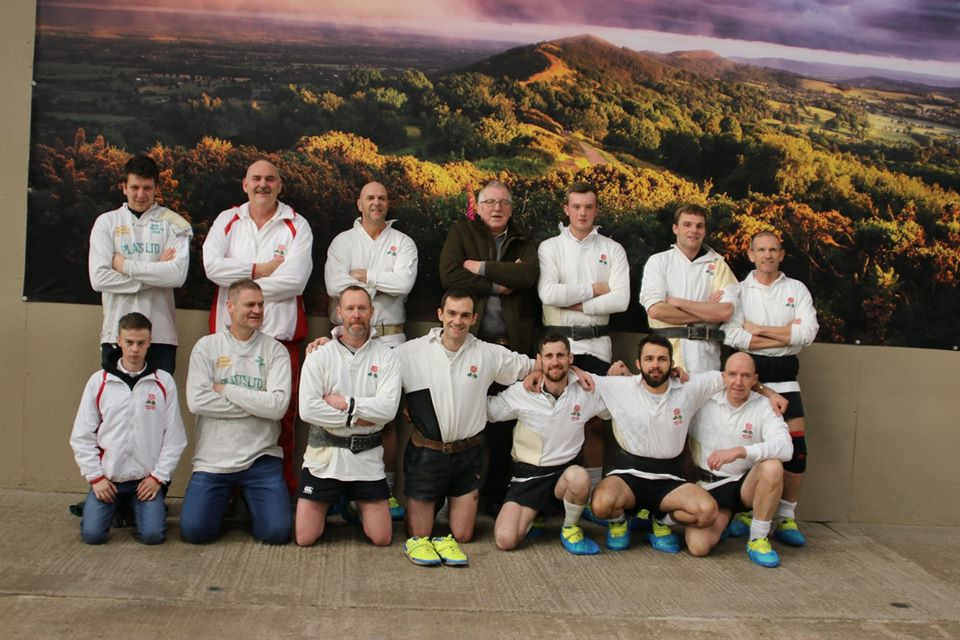 The event started with a short opening ceremony followed by the start of the mens 600kg competition. England were represented in this weight class by Bosley. There was some tight competition in the group stage with Scotland A topping the group without losing an end, with Northern Ireland A finishing as group runners up. England A finished as the bronze medal winners with Scotland A and Northern Ireland A contesting the final. This was a much closer affair than the group stage match with Northern Ireland A managing to hold Scotland out on both ends to win a well deserved gold medal by 2 ends to 0. Photo: England A 600kg squad represented by Bosley. 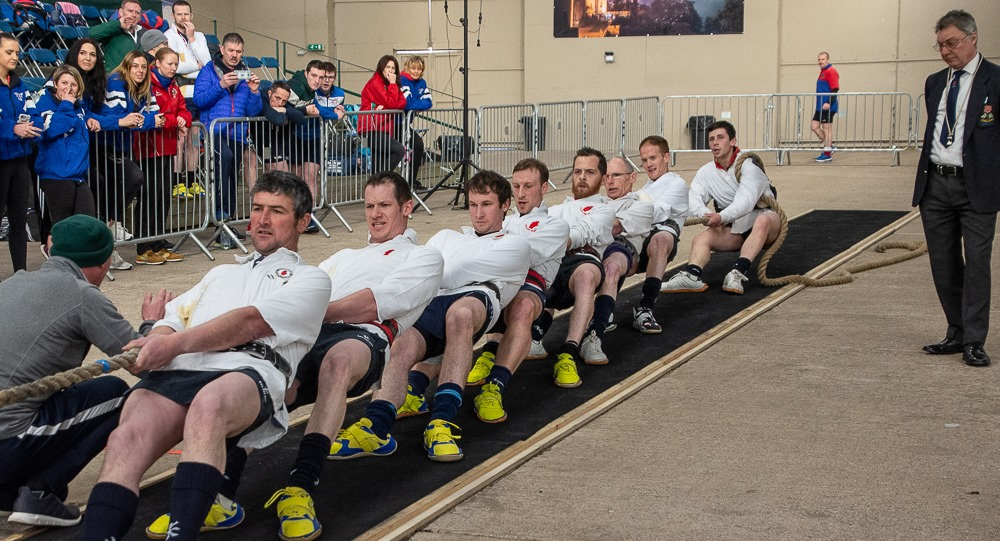 The men’s 680kg competition followed and this was another closely fought out competition. In this weight class, England A were represented by Uppertown and England B were represented by Raunds. There were some close matches in the group stages and the semi finals saw Scotland A meet England A and Northern Ireland A meet England B. Both semi-finals were keenly contested matches with Northern Ireland A defeating England B and Scotland A defeating England A. This left England A and B fighting it out for the bronze medal, meaning that England was guaranteed a second bronze medal of the day. It was just a matter as to which team it would go to. Photo: Northern Ireland A - Men 600kg Winners 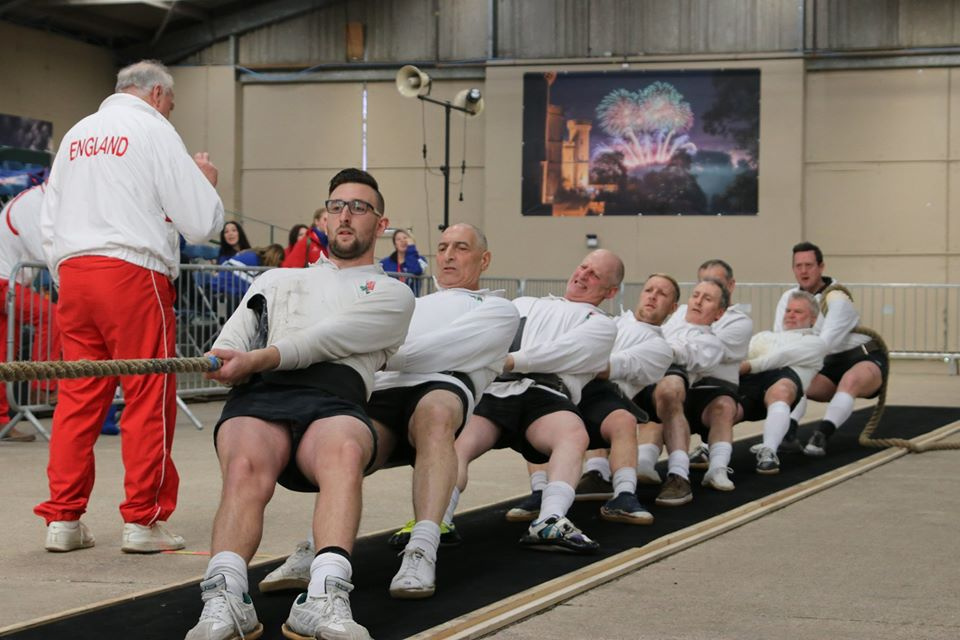 The bronze medal match was very evenly contested and was a very exciting pull which England A went on to take by 2 ends to 0 in a bruising encounter. The final was another keenly contested match between Northern Ireland A and Scotland A, and despite being known as a strong force in the lighter weight classes, Northern Ireland A were a difficult opponent for Scotland to overcome after these teams had already gone to a 1-1 match in the group stage. In two very close ends, Scotland A had the edge in terms of power and had enough in them to get the rope over the line and win by 2 ends to 0. Photo: England B 600kg team represented by Raunds 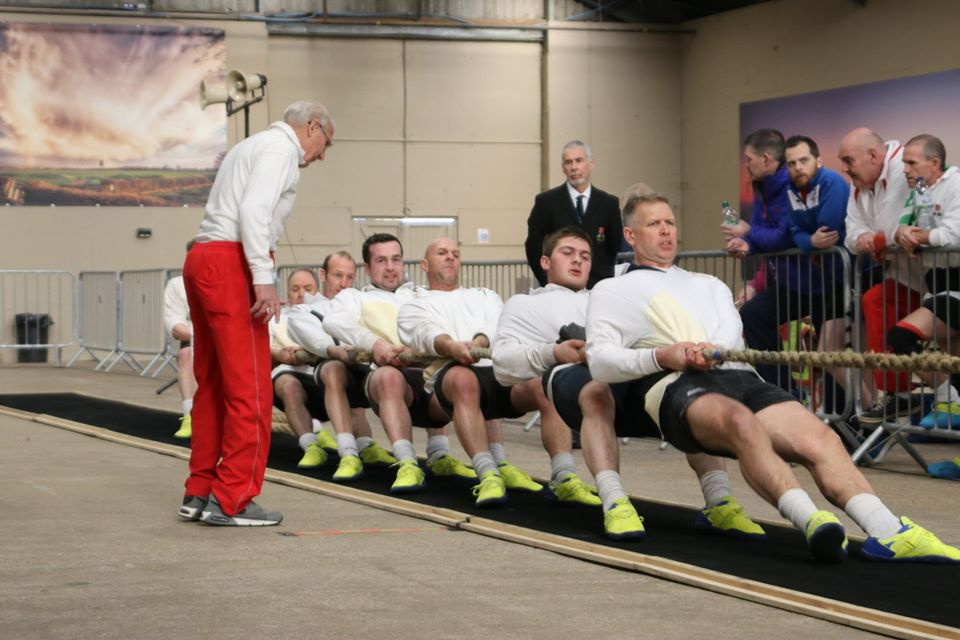 Following the completion of the two closed weights, the open 640kg competition took place which was pulled as a straight group, but this time just the top two teams progressing to the final. English clubs in this weight were Raunds and Bosley and they had a good match first on which went 1-1. The overall group standings saw Country Club from Northern Ireland progress to the final with Ayrshire from Scotland. As with the two closed finals between Northern Ireland and Scotland, this was another evenly matched contest which went the way of Country Club by 2 ends to 0. Photo: England A 680kg team represented by Uppertown 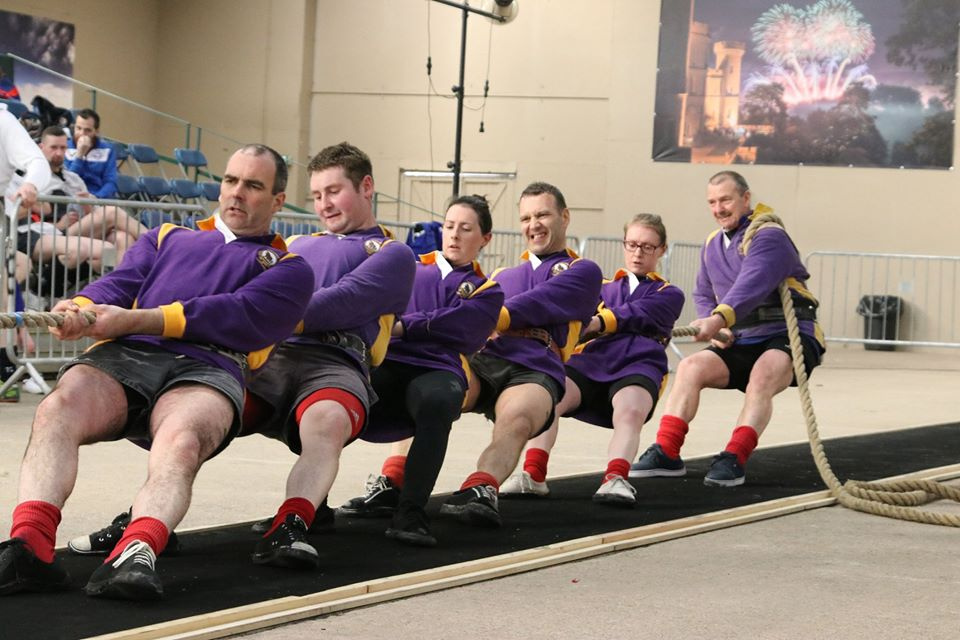 As the final open weight of the first day of competition, a 460kg 4+2 weight was put on with teams comprising 4 men and 2 ladies. This weight was put on as only Wales had a ladies team present at the this year’s British and Irish Championships, so to give them some competition, a 4+2 competition was arranged with the ladies forming teams with other mens clubs. There was some good exciting matches in this weight class, particularly between Ayrshire and Bosley B, but the top two teams to progress were Country Club and Ayrshire, with Country Club winning a well deserved final by 2 ends to 0 after not dropping any ends at all. Photo: Ayrshire "4+2" 6 a side team

In the evening the presentation of awards took place at The Abbey Hotel, which was an enjoyable evening enjoyed by all.

The second day of open club competition took place on Sunday 2 February and as expected, there was some more close competition. 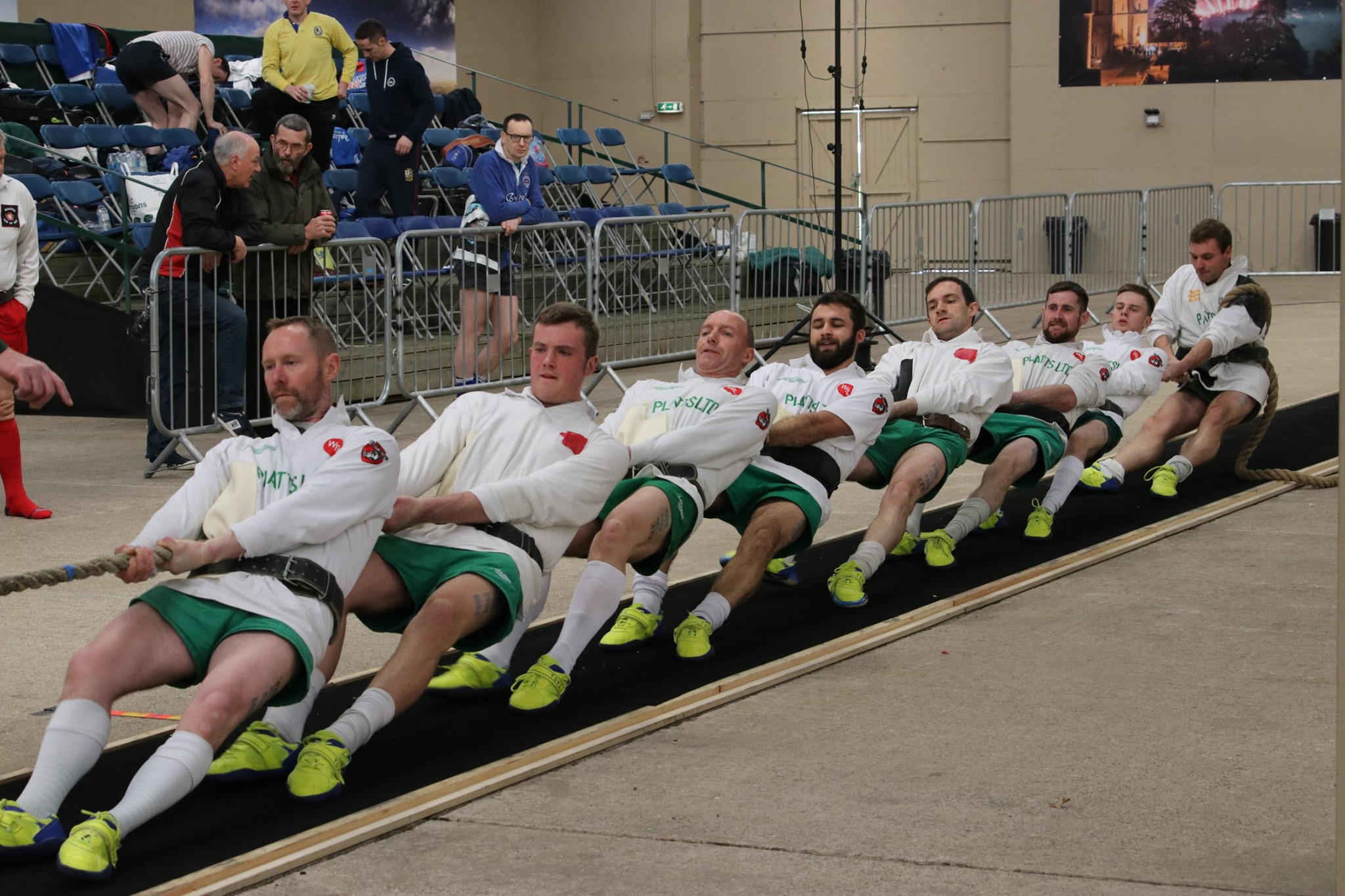 The 560kg competition opened the proceedings with Bosley the only team from England taking part against the other countries. Despite not making it to a medal placing, the team put in a good performance and would have learned a lot from the experience with some young new members in their team. The final was contested between Ayrshire and Richill with Ayrshire performing strongest in the final to earn a good 2 ends to 0 win. Photo: Bosley 560kg team. 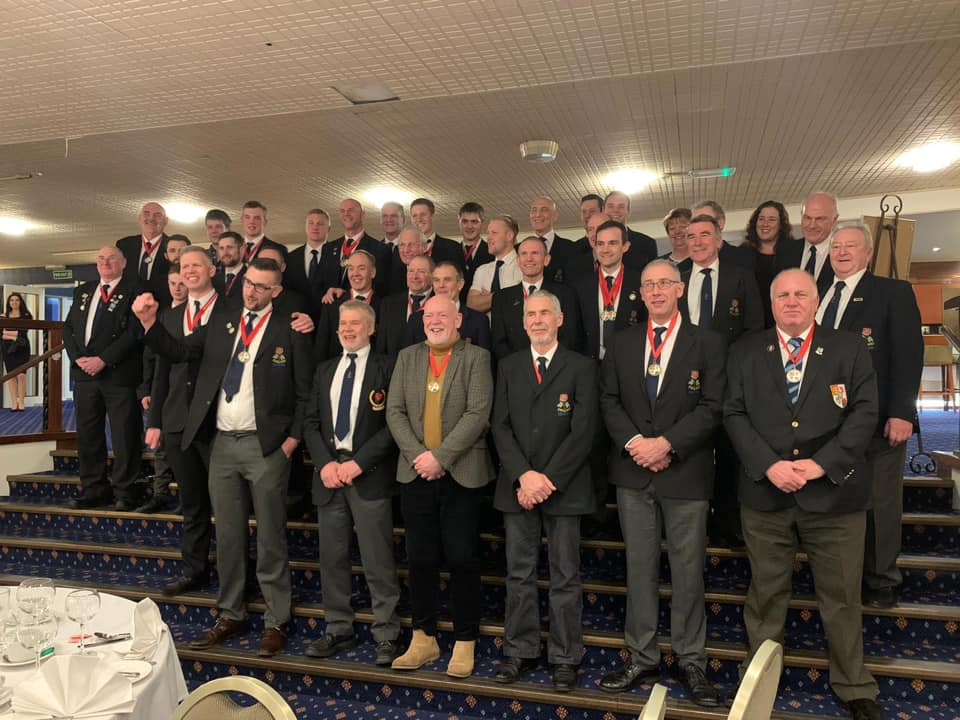 The 680kg competition was another good event with both Raunds and Bosley from England competing. Neither team made it to the medal placings but gave a good account of themselves. The final saw Country Club and Cornhill meet in the final, with Country Club dominating the final to earn a well deserved gold medal by 2 ends to 0.

A ladies 6 a side ladies competition was held alongside the 680kg competition with Penhow entering A and B teams. A number of rounds were contested between the two teams with Penhow A winning the gold medal and Penhow B the silver.

The final mens weight of the day was the 600kg competition, again pulled as a straight group with the top two teams progressing to the final. Bosley were the only English club competing in this weight class and didn’t progress to the final. The final once again saw Ayrshire and Ballyhegan take to the mats with Ayrshire winning their second lightweight gold of the day by 2 ends to 0.

The final weight of the day was the mixed 580kg competition, and again Bosley were entered and progressed to the final where they met Cornhill from Scotland. On this occasion Cornhill proved to be too strong and won the gold medal by 2 ends to 0.

Photo: England squad and TOWA officials in attendance at the presentation dinner. 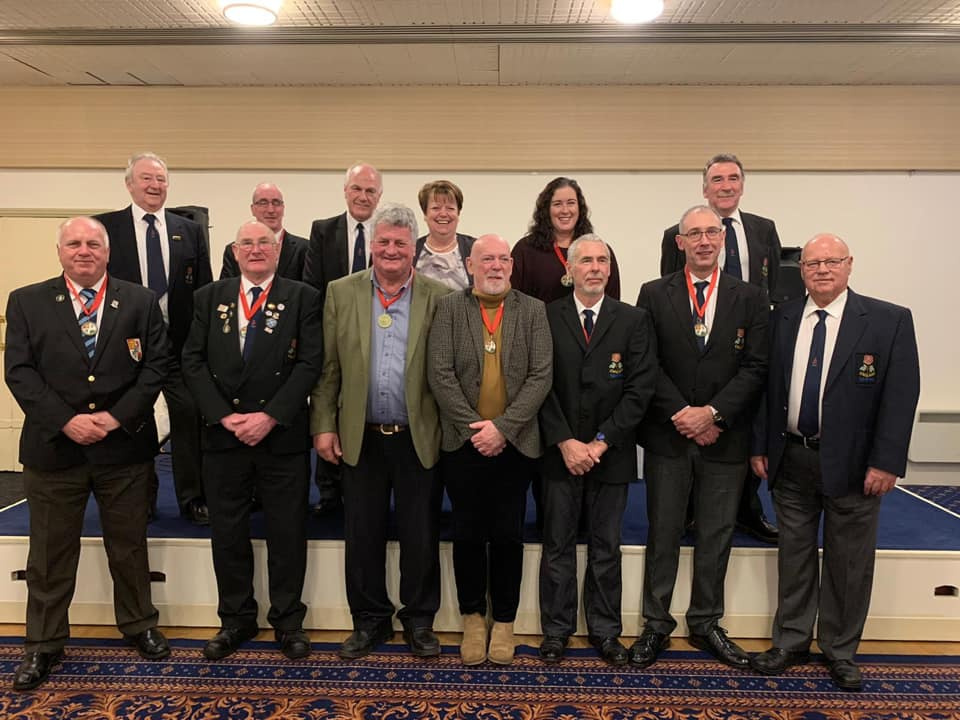 The Tug of War Association would like to thank everyone who came along to support this event and we hope that all of the teams and supporters enjoyed the competition. The officials over the course of the weekend were Wendy Dyer, Caroline Abri, Mark Williams, Pete Dyer, Gavin Corden, Dave Kitchener, Tony Henshaw, Roger Beardsmore, Mick Grimston, Vernon Hurst, Alec Masson, Mike Callaghan, along with volunteers Jill Callaghan, Heather Grimston, Sheila Masson, Nigel Summers and Carol Summers. Thanks also to Mick Copper who did much of the work organising the event behind the scenes on behalf of the TOWA.

Good luck to everyone taking part at the World Indoor Tug of War Championships in Letterkenny, Ireland later this month and we otherwise look forward to seeing everyone on the forthcoming outdoor circuit!