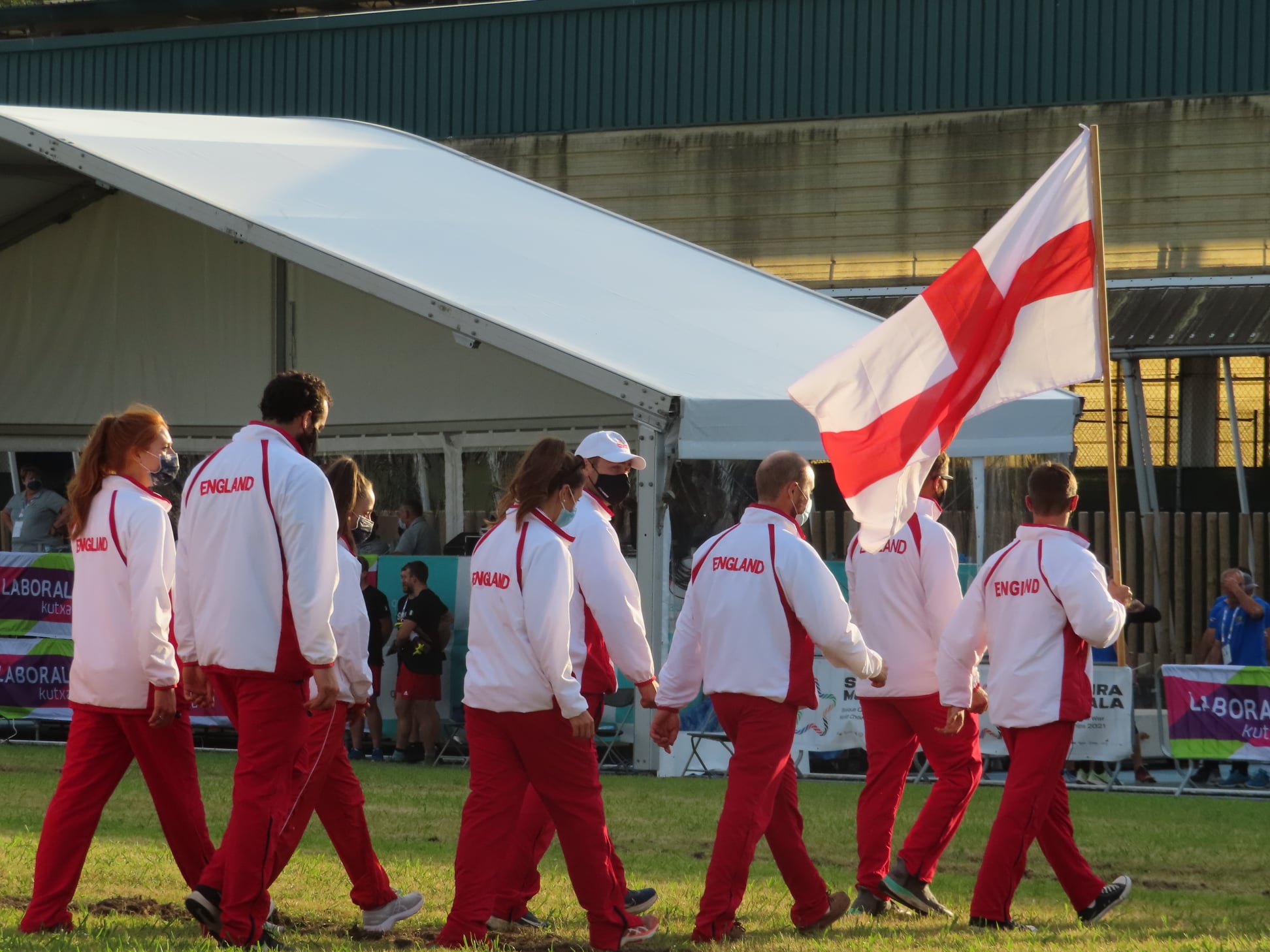 The Saturday and Sunday saw the closed international events taking place, with England being represented in the mens 560kg, 640kg, 680kg and 720kg, Mixed 580kg and Ladies 500kg and 540kg. England travelled with a smaller squad than is usually the case, but fielded a team in all senior weight classes. After much uncertainty and no club or international competition for 18 months, it was difficult to know which teams were the favourites going into the event, which made for an exciting and unpredictable competition. But one thing was for sure, it was great to see international tug of war happen once again! 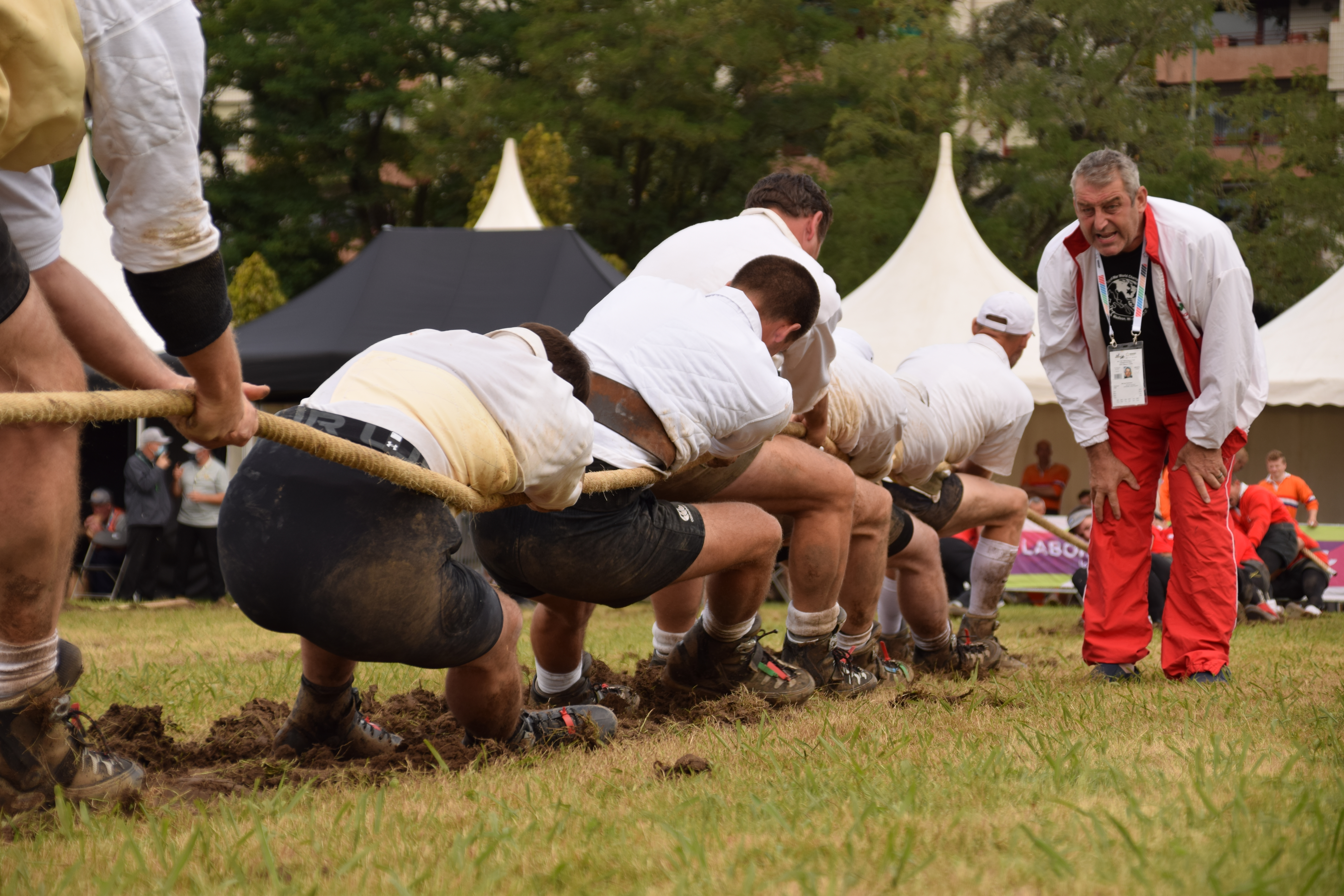 The 680kg saw England being represented by Oxney Vines Cross, who were supported by some pullers from other clubs. It was a tough competition with England competing well enough in the group to make the top 4 and qualify for a place in the semi finals along with the Netherlands, Switzerland and Germany. The Netherlands, Switzerland and Germany all finished level on points, so the group ranking to determine the semi final placings (where 1st pulls 4th and 2nd pulls 3rd) was determined by cautions. Germany received less cautions, so they finished top of the group and met England in the semi-finals with Switzerland competing against the Netherlands.

England were up against a strong team from Germany and didn’t have enough to overcome the German team on this occasion, so would face either Netherlands or Switzerland in the bronze medal match. The match between the Dutch and the Swiss went to three ends with the Netherlands progressing to the final.

England faced Switzerland for the bronze, and despite a good committed effort, the Swiss had too much and won the bronze by 2 ends to 0, leaving England with a still creditable 4th place. The final saw the surprise package of this weight class, Germany take a 2 ends to 0 win to win the 680kg world title for the first time ever. 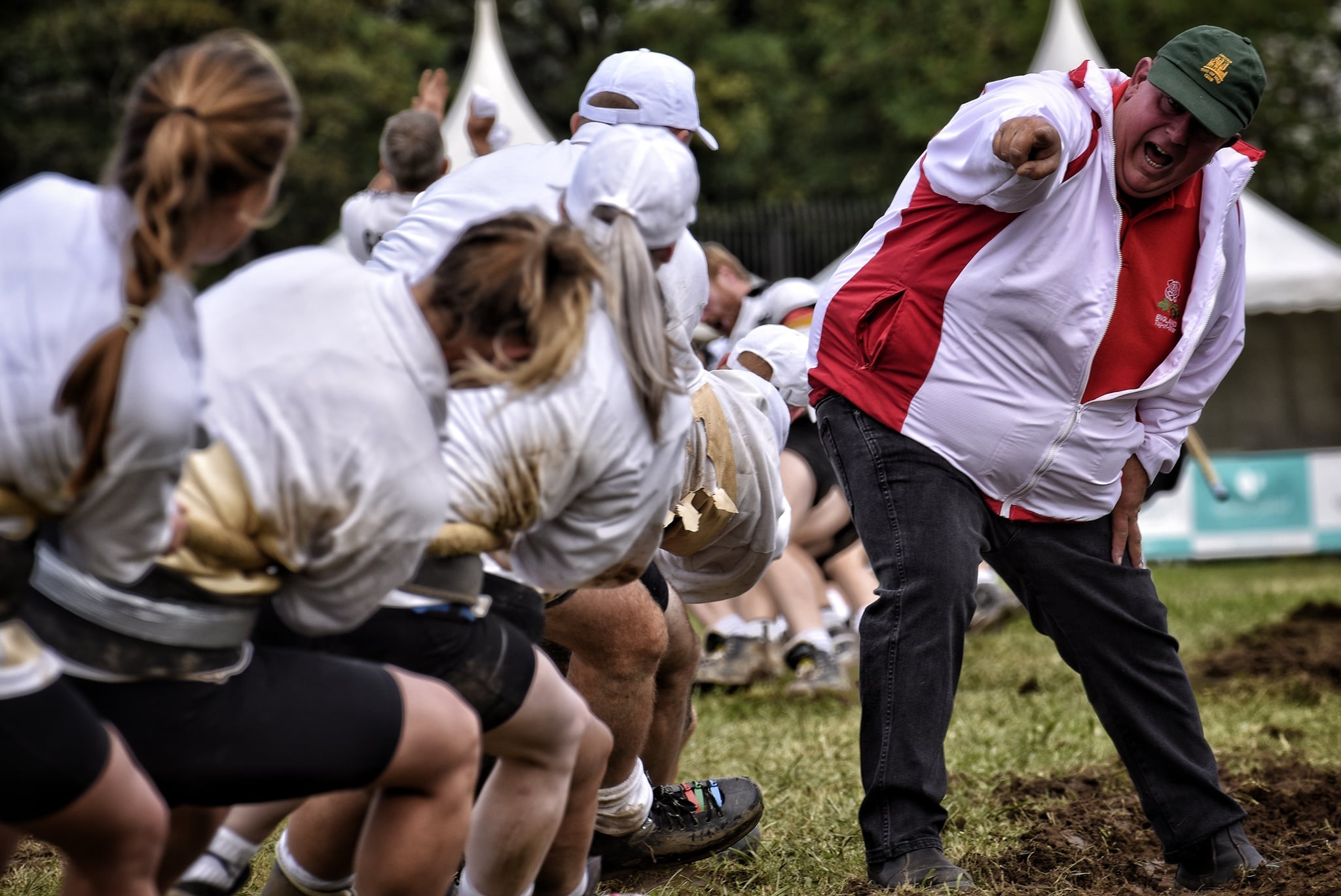 At the same time as the 680kg competition was taking place, the mixed 580kg was taking place with England being represented by Lincoln and Bedford Ladies. There was a larger entry in this weight class with the competition being split into two groups. England were drawn in the same group as Belgium, South Africa, Germany, Czech Republic and the Netherlands. England had a good run in the group, topping the group without losing an end. Second place in the group was a tie between Germany and the Netherlands and when the criteria was applied, Germany progressed to the semi final in second place. The second group saw Sweden progress as group winners ahead of Switzerland, who finished second, Basque Country, Israel, Italy and France.

In the semi-finals, England faced Switzerland, but succumbed to a 2 ends to 0 defeat and went into the bronze medal match against Germany who had been defeated by Sweden. England had beaten Germany earlier in the competition, but the bronze medal pull turned out to be a tough match. The first end was a stalemate with the rope hardly moving for around 4 minutes when the judge declared a no pull and moved the rope over to fresh ground. From the restart England started to get an advantage, but didn’t get close enough to the line before Germany started to take the rope back. However, Germany started to receive cautions, and eventually picked up a third caution with the first end going to England. On the second end, England attacked from the drop and Germany had no answer, with England taking the rope over the line to claim the bronze medal. The final was won by Sweden who defeated Switzerland by 2 ends to 0. 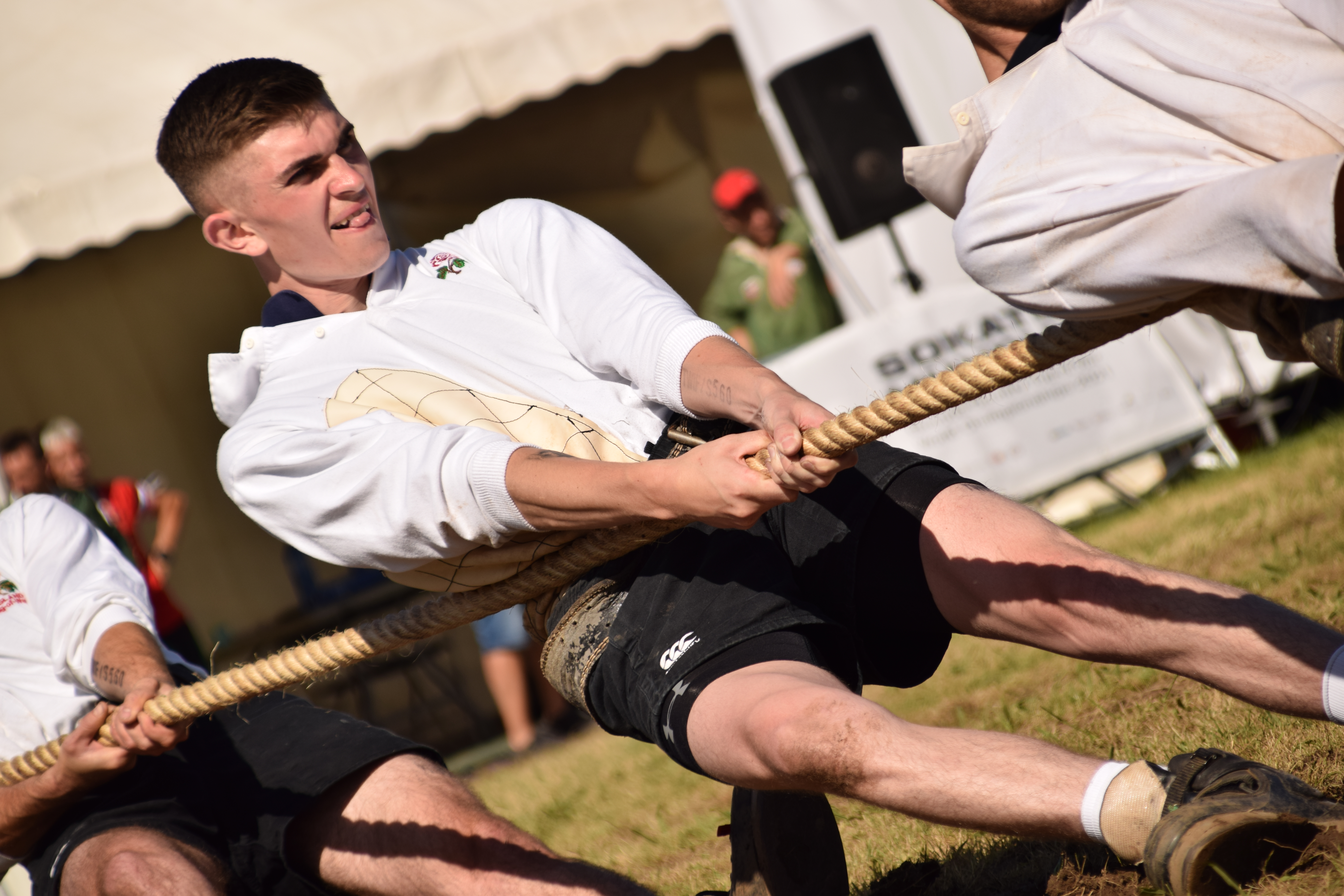 The mens 560kg competition is always a keenly contested weight class with the previous 3 world championships in this weight class being won by different nations on each occasion. At the end of the group round, the Switzerland progressed in first place, followed by Germany and the Basque Country with England finishing in 4th place. In the semi finals, England faced Switzerland and missed out on a place in the final by 2 ends to 0. In the second semi final, defending champions Germany were defeated by the host nation, so went into the bronze medal match against England. Despite a great effort by the England team, it was Germany who came out on top this time with a 2 ends to 0 win. An exciting final between the Basque Country and Switzerland followed, with Switzerland coming close to taking the first end, only to run out of Steam with the Basque Country bringing the rope back over the line. On the second end, Switzerland couldn’t stop the Basque Country and the host country won the gold medal. 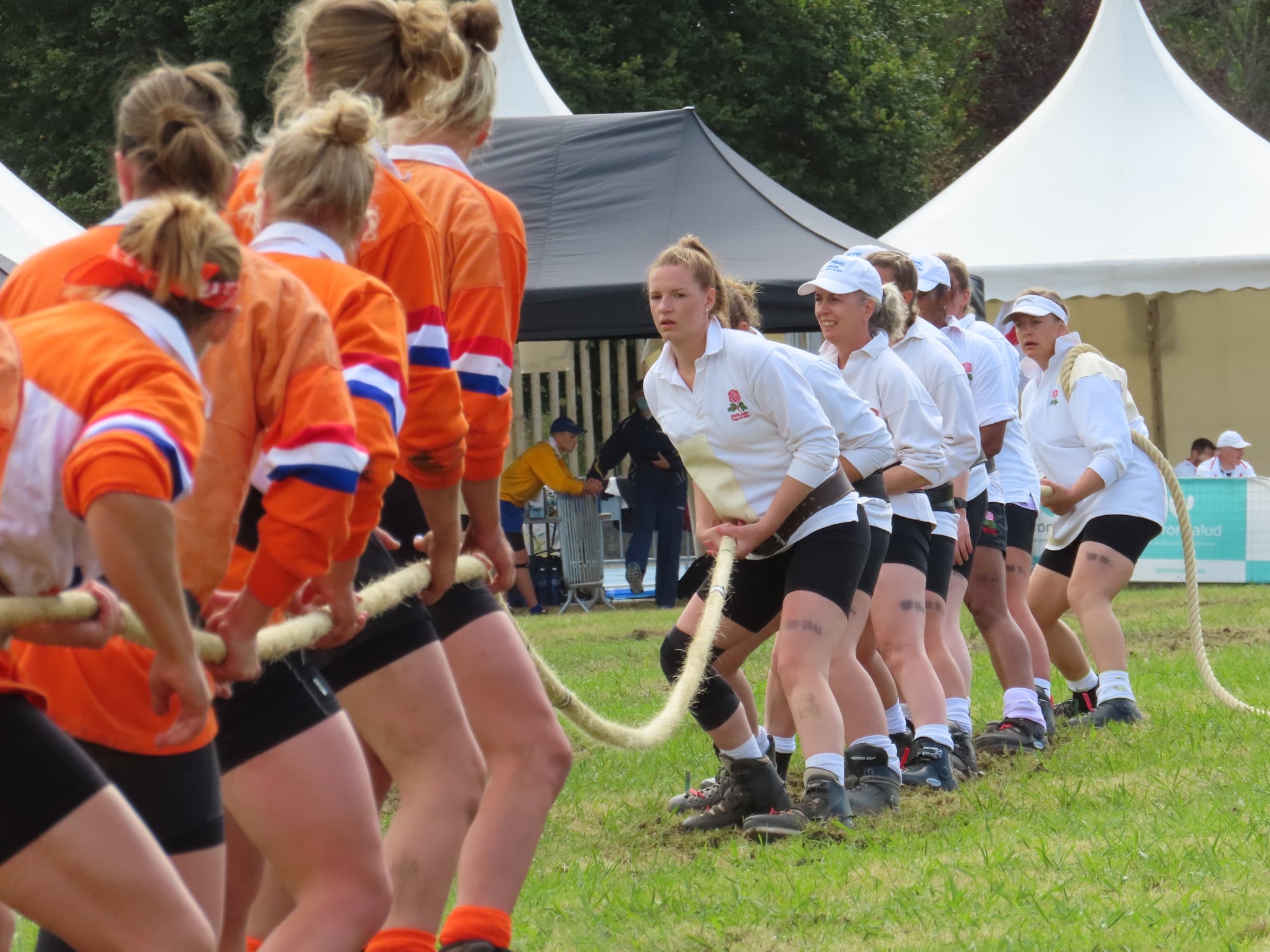 A recording of the live streaming from the first day of international competition can be viewed below. 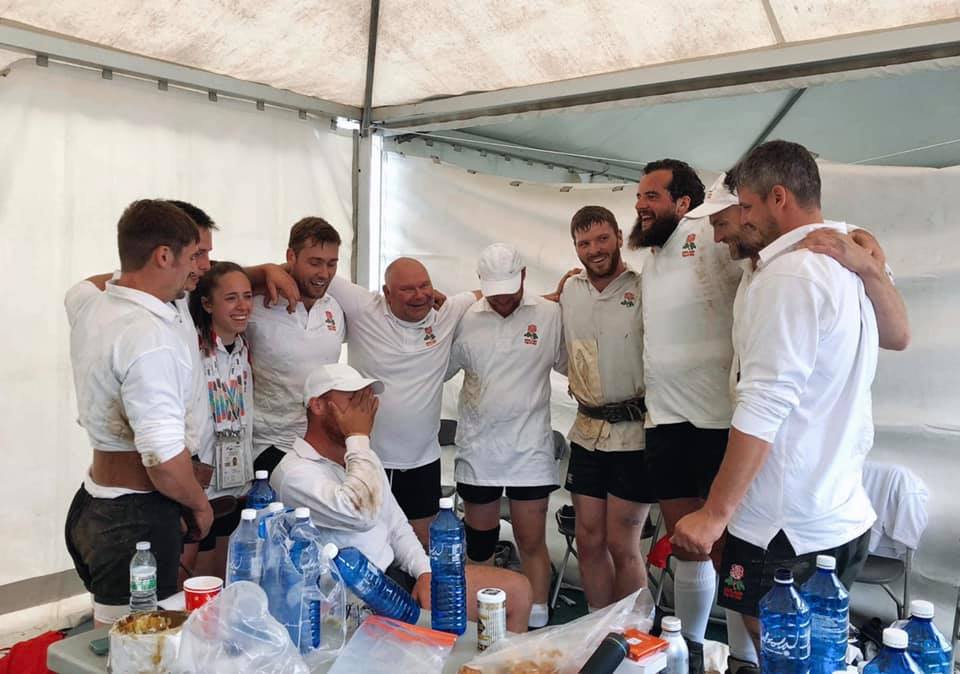 The morning started with the 720kg competition with Essex representing England for the first time. England started with a good 2 ends to 0 win over Israel, and followed this up with wins against France and Poland, but didn’t have enough experience to defeat the more experienced teams from Switzerland, Netherlands, Germany, Latvia and the Basque Country, but finished in a creditable 6th position overall. This was a valuable learning curve for a relatively new team to the Association, and we hope that Essex have learned a lot from their experience and take this forward into the future. The competition was eventually won by Switzerland, with Germany winning silver and Netherlands winning bronze. 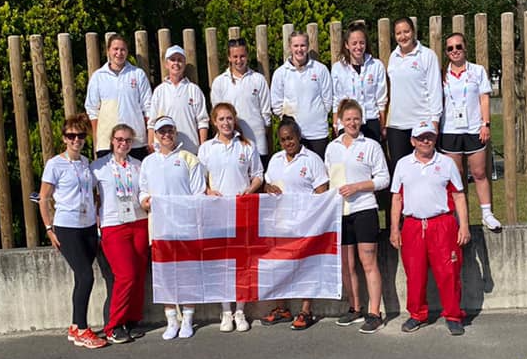 The afternoon saw the ladies 540kg and mens 640kg competitions taking place, with both of these weight classes being the qualifier for the 2022 World Games, which take place in Birmingham, Alabama, USA.

The ladies 540kg saw an entry of 10 teams pulled in a straight group, which resulted in a long competition. It was a tough competition, with England, represented by Bedford Ladies, picking up wins against Israel, South Africa and Czech Republic, but struggling to make an impact against the more established nations. In the end, England finished 7th in the group missing out on a place in the semi finals. The gold medal was eventually won by Sweden, who had gone a few years without winning a gold in the ladies weight classes, with Switzerland winning silver and Netherlands the bronze. 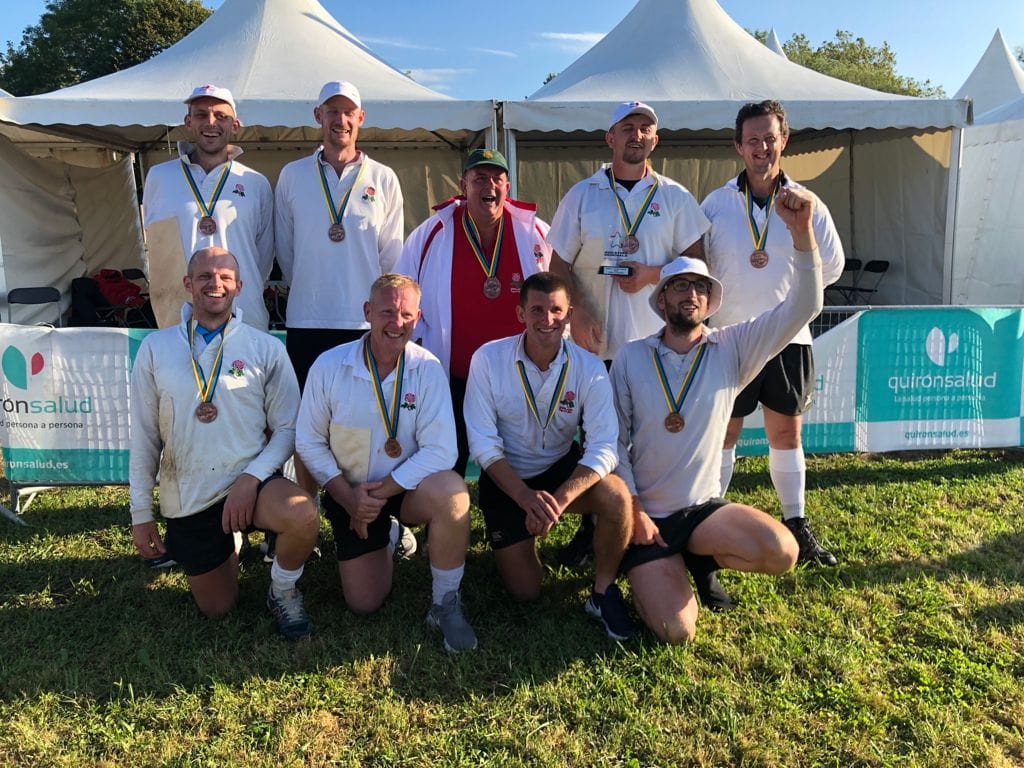 The 640kg competition brought the championships to a close and was also pulled in a straight group of 11 teams, with the top four teams progressing to the semi finals. It was a long, tough competition with Switzerland topping the group without losing an end. There were a number of close matches in the group, and a number of 1-1 pulls. England, represented by Lincoln, overcame Russia, Basque Country, France, Sweden, Netherlands and Czech Republic, and had 1-1 pulls with Belgium, Germany and Italy, only losing to Switzerland. England therefore finished third in the group and progressed to the semi finals with Switzerland, Germany and Netherlands.

So after a tough two days of competition, England came away from the international competitions with 2 bronze medals, 3 fourth place finishes, a 6th place and a 7th place. With a more limited England squad in terms of numbers than is usually the case, these results are a great achievement and we would like to thank all of those teams and pullers who represented England in difficult and uncertain circumstances. We would also like to extend our thanks to the Getxo Organising Committee for all of their hard work and diligence in making the event possible. We look forward to hopefully seeing everyone on the international circuit in 2022.

You can watch a recording of the live streaming from the final day of competition below: 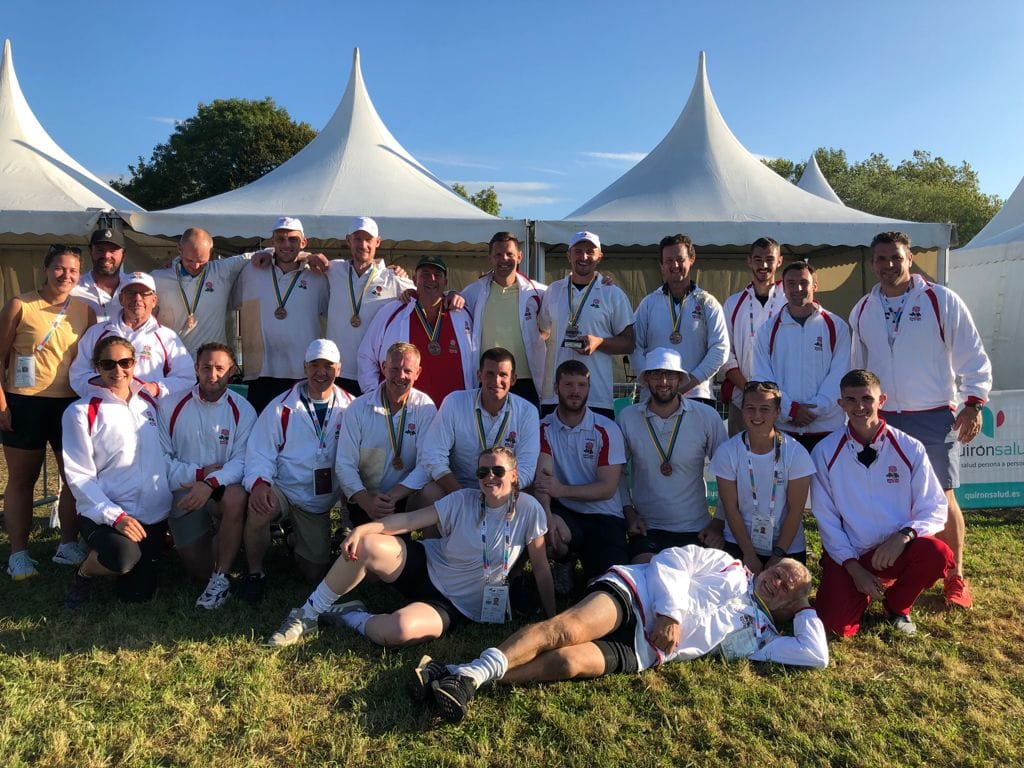