This weekend we had three tug of war events taking place around the country, making it a very busy weekend of tug of war! The results from each event can be found below.

Results from the night: 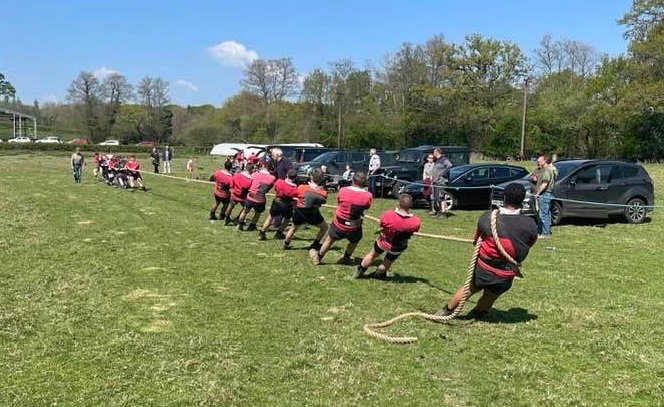 The first of two events that took place on Sunday was hosted by Oxney Vines Cross. Unfortunately, there was a low turnout of clubs here and only two teams attended the event from host club Oxney Vines Cross and Hailsham. The clubs in attendance made the best of it and formed teams in all weight classes with the results being as follows:

The officials on the day were Vic Ludkin and Peter Tuckwell.

The Melton Mowbray Ladies competition took place at Melton Rugby Club and was supported by the following clubs:

Men – Felton Eccles (A and B), Lincoln (A and B), York, Bosley, Sandhurst, Bedfordshire, with Melton Ladies and Bedford Ladies joining the mens 600kg competition.

The day started with the catchweight with Lincoln, York, Felton and Bedfordshire taking to the field. Lincoln once again dominated the competition to win the group on maximum points, followed by Felton Eccles finishing as the runners up with York finishing ahead of Bedfordshire in third place.

The ladies 560kg was a good competition, and once again this week, Melton Mowbray had two teams in this weight class, and their A team ran Bedford Ladies close, with the final pull of the round going 1-1. When the TWIF rules criteria was applied, Bedford Ladies finished as group winners followed by Melton A who finished as worthy runners up.

The mens 580kg saw Felton, Lincoln, Bosley and York take to the field. There was some good close pulling in this weight class, but it was Lincoln who came out on top on maximum points, followed by Felton Eccles who finished as runners up.

The ladies 540kg saw another good entry of ladies teams and once again it was Bedford Ladies who took first place overall without losing any ends. Melton A finished as the runners up.

The mens 680kg was pulled in one group with Lincoln A and B, Felton Eccles, Bosley and York taking to the field. Lincoln A finished as overall winners with Felton Eccles finishing as the runners up.

The 640kg was pulled as a straight points competition with Lincoln A and B, Felton A and B, York, Bosley and Bedfordshire competing. Lincoln A won the group without dropping an end, but there was some good competition for second place which ended up going to Felton B.

The final weight of the day was the mixed 580kg which was split into two groups. Sandhurst, Bedford, Essex and Bosley were in group 1, with Lincoln, Bedfordshire A, Bedfordshire B and Melton being drawn into group 2. In group 1 there was a tie for first place between Bedford and Sandhurst with Sandhurst going through after the TWIF criteria being applied. In group 2, Lincoln finished ahead of Melton to reach the final. In the Lincoln v Sandhurst final, it was Lincoln who took the pull by 2 ends to 0 to finish on another clean sweep of weights for the day.

The next weekend of tug of war will see the Felton Eccles 75th Anniversary International Competition taking at Wrington near Bristol on Saturday 30 April and Sunday 1 May, and an event taking place at North Somerset Show on Bank Holiday Monday 2 May. Please note that those who are taking part in the Felton Eccles competition must have pre-booked a weigh in slot with the organisers.

fixtures page for further details about this event and other events taking place throughout 2022.