The 2010 World Indoor Tug of War Championships took place in Cesenatico, Italy, the second time in succession where the world indoor championships have been hosted by the Italian Tug of War Federation. 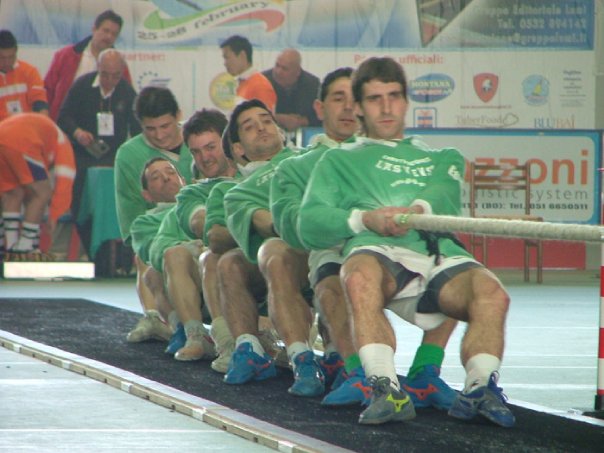 The first two days of the event were the open club competitions. There was little involvement by English clubs in this weight, although Raunds entered a team in the 640 kilos, and Kilroe entered a team in the 600 kilos. Neither team reached the semi finals, with both teams concentrating on representing England at the weekend. Abadino from the Basque region of Spain pulled very well to win the Open Competition at both 560 kilos and 600 kilos, with Bremore from Ireland winning the 640 kilos event, and Heidenskip from the Netherlands winning the 680 kilos event. Photo: Abadino in the Men 560 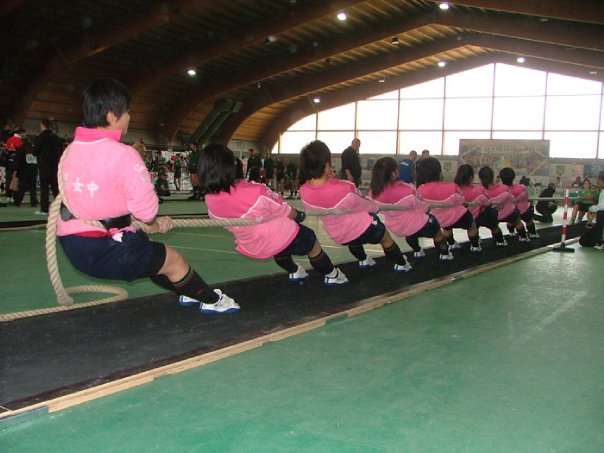 In the ladies open competition, the ladies teams from Chinese Taipei won both the ladies 500 kilos and ladies 540 kilos competitions. It was a different team to what we have seen dominate ladies indoor tug of war for the past 4 or 5 years, but this new team were technically just as good as their predecessors, and they won both finals against Basque team Badiotz. Photo - Chinese Taipei in the open 540 kilos. 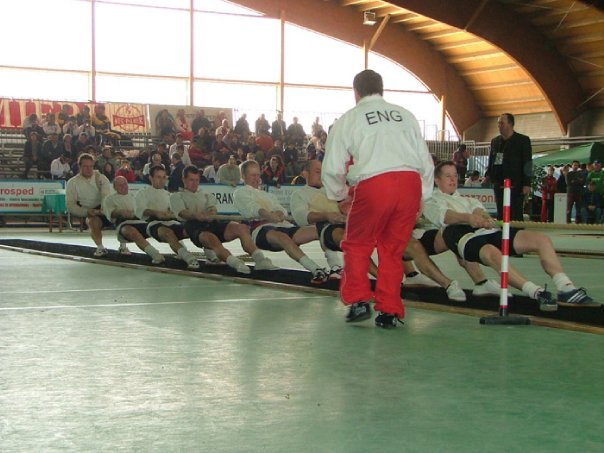 The closed competition started with the opening ceremony on the Friday evening, with pulling starting on Saturday with the mens 560 kilos competition. 10 countries fielded a team in this weight class, which turned out to be a very stern test for all teams taking part. England were represented by Norton in this weight, who progressed through the group finishing in first place, having lost one end to Scotland in the group. England progressed along with the Netherlands, Scotland, and 2008 winners Northern Ireland. With the quality of the teams in the last 4, the semi final draw would have a big impact on the final result. England were drawn against Scotland, with Northern Ireland apparently having the easier draw against the Netherlands. Northern Ireland progressed to the final, with a hard fought 2 ends to 1 win over the Netherlands, but all eyes were on the thrilling battle between England and Scotland. England eventually won by 2 ends to 1, however not before the final end was blown back to the middle twice after both teams received cautions for infringements. It really was a close semi-final which took a lot out of both teams. Photo - England 560 kilos team 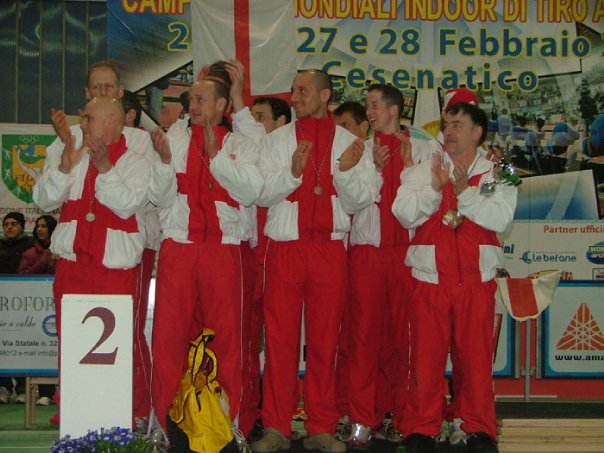 There was a break before the final to allow the bronze medal pull off for both the mens 560 and the ladies 540 to take place, with Scotland taking a hard earned bronze medal by defeating the Netherlands by 2 ends to 1. The final came along with England looking to win the 560 kilos title last won in 2006. Northern Ireland made the better start, taking the first end. The second end saw England taking rope of the Northern Ireland team before both teams started picking up cautions. The second end was then blown back to the middle for a re-start, and both teams went to battle again. Again, England took rope, but both teams were picking up the cautions, and the second end was again blown back to the middle. The pull commenced again, and with both teams having to dig deep, England picked up the extra cautions which gave Northern Ireland a second 560 kilos world title. Despite the defeat, it was a great performance by England to compete like they did in the final after a tough semi-final against Scotland. Photo - England 560 team on the podium

The ladies 540 kilos event took place alongside the mens 560 kilos competition. There was only a small entry of teams in the ladies weights this year, with none of the home countries fielding sides. Many other countries did not field sides this year, which may be due to the financial difficulties many of us have experienced in recent months. Chinese Taipei again became World Champions, but were not without a fight this year, having had to defeat China by 2 ends to 1 to take the gold medal. Japan won the bronze against Switzerland.

The afternoon saw the mens 640 kilos competition take place. The defending champions were Scotland, but England went in to the competition with confidence of making a severe challenge to Scotland. England were represented by Sheen, who already defeated Scotland at the UK championships in January, and they were confident of further success. 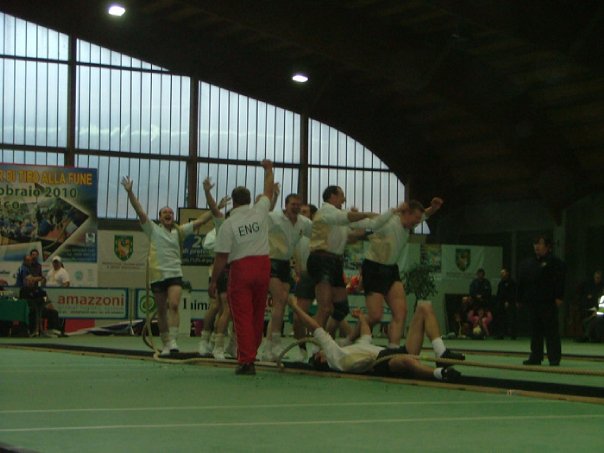 England started the competition well, defeating Serbia, China and the Netherlands, before they met Scotland in the next round. England took both ends, although Scotland were no showing their hand at this point. England progressed to the semi finals along with Scotland, the Netherlands, and the Republic of Ireland, and were drawn against the Netherlands in the semi-final. England controlled this match well to make it to the final with a 2 ends to 0, where they again met Scotland. Photo: England 640 team celebrate winning gold 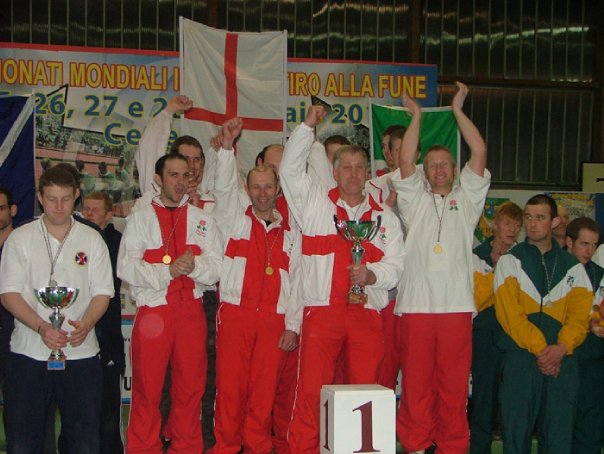 The final was very close, with Scotland taking 3 metres of rope from England before both teams hit the floor. Having received cautions, it was important for both teams to keep clean. England managed to come up off the floor quickest, and started to take Scotland back before Scotland received their third caution for sitting. The second end was an equally stern test for England, and went much the same as the first end, with England having to battle really hard to take Scotland over the line and secure the gold medal. England last won the 640 kilos title in 2002, and it was the first World Championship gold medal for a representative Sheen team since 1993. Photo - England 640 team on the podium

You can watch the final as shown on Italian TV below:

Day 2 commenced with the 600 kilos competition. Scotland were the defending champions, and England again had high hopes of at least reaching the final. England had a tough start against the strong Northern Ireland team, but came through with a 2 ends to 0 win. England progressed to the semi finals in second place in the group behind Scotland who defeated England in the group stages. 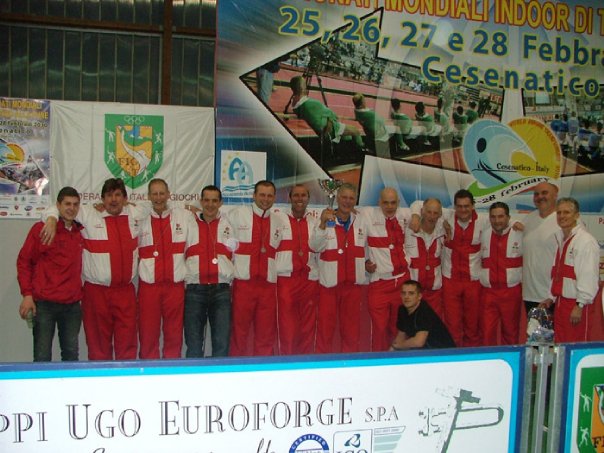 In the semi-finals, England were drawn against the Republic of Ireland, with Scotland being drawn against Northern Ireland. England quickly dispatched of Ireland by 2 ends to 0 in their semi final, with Scotland defeating a strong Northern Ireland team in their semi-final. Northern Ireland went on to secure the bronze medal against the Republic of Ireland. The final was another battle between England and Scotland. Both teams were strong, but Scotland got the upper hand on the first end after a slip from the England team. Scotland then went on to take the first end after England received three cautions. The second end was a much closer contest with both teams taking rope. Both teams then started to pick up the cautions, and with both teams on two cautions, they both hit the floor. The judge then awarded the pull to Scotland after giving England their third caution, which gave Scotland their first gold of the tournament. Photo - England 600 kilos squad 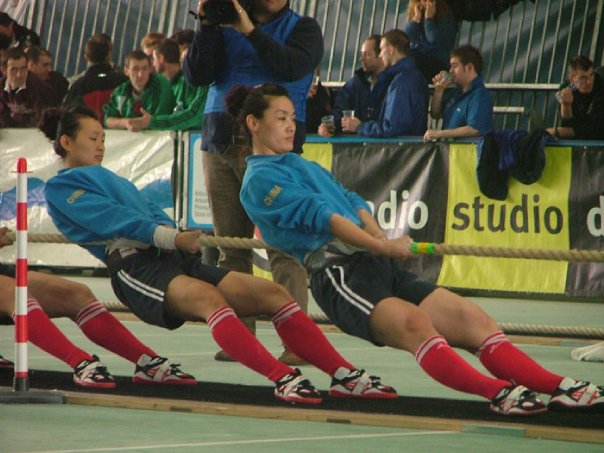 The ladies 500 kilos event was another small competition in comparison to recent indoor championships. Japan secured their second bronze medal of the tournament by defeating Switzerland, but there was a good final between Chinese Taipei and China, with both countries fielding strong teams. There was to be no repeat of the previous days final however as China went on to defeat Chinese Taipei by 2 ends to 0 to take a first ever TWIF World Championship tug of war gold medal for China. Photo - China Ladies Team 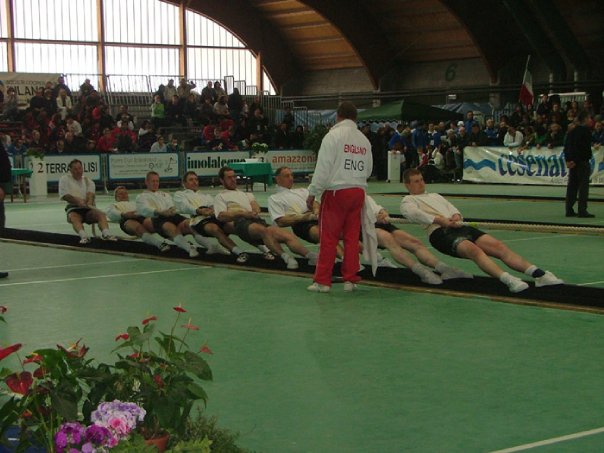 The final day of competition concluded with the mens 680 kilos competition, with England being represented by Raunds. Having had a good first half of the season, Raunds lost several pullers from their squad, and utilised pullers from Sheen to strengthen their squad for this weight. England made a good start, going one end each with the defending champions from the Netherlands. England also dropped ends to Scotland and Ireland, but beat all the other nations competing to earn a place in the semi finals, along with Scotland, the Netherlands, and Ireland. Photo - England 680 team

In the semi-finals, England were drawn to face 2008 silver medallists Scotland, with England being defeated by 2 ends to 0, which resulted in England having to face Ireland in the pull off for the bronze medal. The Netherlands defeated Ireland by 2 ends to 0 to reach the final. In the bronze medal match, it wasn’t to be for England. Having lost the first end, England made a substitution, but it was to no avail, as Ireland took their second bronze medal of the championship. The final gave Scotland a comfortable 2 ends to 0 victory to secure their second gold medal of the event.

Well done to all of the England teams who took part in the event. With all teams finishing in the top four, and to come away with one gold and two silver medals, it represents our best results for a few years. We now eagerly look ahead to the outdoor season, and we look forward to seeing everyone again for the March training leagues, and forthcoming open competitions which start in April.